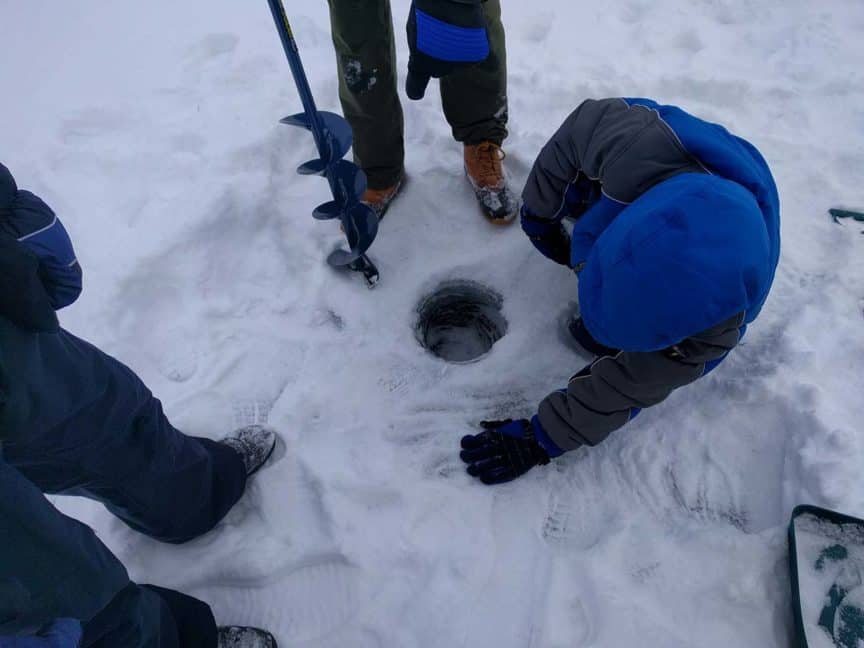 The winter season mostly comes with a lull and boredom. Ice fishing for walleye is certainly one of the surest ways of kicking out the boredom as it allows anglers, young and old, to be outdoors. Targetting walleye is the most popular among the anglers.

There is an old joke that ice fishing is a sport many people try only once. It does not have to be this way. Let us first talk about the basics.

This is the most important part of ice fishing. Two inches of snow normally support an average person, six inches will carry a snowmobile, and ten inches will support a truck. To be on the safe side, overestimate these figures.

When going Walleye fishing, carry the required safety equipment and the ice fishing essentials. Metal cleats for boots and ropes with loops or even life preservers because you will never know when they might come in handy.

Where to Find the Walleye fish

The unwritten starting point is that if a certain area usually has some fish when unfrozen, it will definitely have some when frozen. In the winter seasons, walleyes tend to position around spawning sites only moving to feed in predictable patterns.

Do not bother about the walleye migration pattern since it is usually completed by this time. Actually, finding walleyes under the ice is about knowing their movements and peak feeding time when they are chasing prey.

The easiest way to find a suitable spot for walleye is by finding the location of its prey species. Walleyes move to shallow waters as they search for prey. This can help you know where they are headed next.

Their feeding movements usually occur about ninety minutes before dusk and into the evening. Unlike other types of fish, Walleyes are not active at dawn but are very active in the evening. They change their positions regularly though not over long distances. To counter this, learn their movements by knowing where their prey is located.

Walleye feeding habits are triggered by light. Any disruption in the light will trigger them to hunt. In low light, Walleyes come near the ice surface to feed.

Generally, Walleyes move from deep holding positions and move closer to the surface. Try looking for such points. Walleye also prefer to hunt this underwater topography. They tend to group in shallow waters that offer good prey habitat and a drop-off.

Walleye have both seasonal and daily movements. They spawn in the spring and water temperatures play an important role. Their ideal spawning temperature is around 48 degrees Fahrenheit and where temperatures are extreme; they absorb their eggs and forego spawning.

Walleye migration patterns have so many variations and are dissimilar regardless of the season. For instance, mature walleye migrate from wintering areas to spawning areas in the spring season. Stream spawning Walleyes migrate into creeks looking for gravels and rocks.

Most of the walleye populations only move over short distances.

Similarly, Walleyes have repetitive migration where they always return to their original locations for spawning. However, intermingling does occur among different walleye populations especially in areas where spawning areas are close.

Over time, these movements become permanent as the walleye population ages. After hatching, the walleyes are scattered by wind and currents. These new populations then repeat the cycle by finding a new spawning are and make it their permanent base.

Tips & Techniques That work In Ice Fishing For Walleye

Walleyes are mostly active in the evenings. To catch them, start cutting your holes at around midday. Locate a sweet spot by observing the walleye preys locations. This is where they are most likely to move. 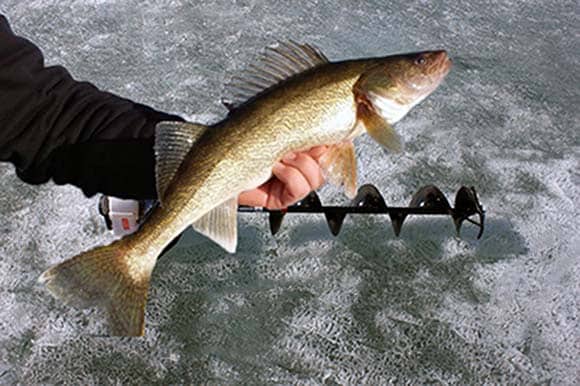 Use flashy lures and baits. Walleyes are very smart; they will only go for baits that seem like the ‘real deal’. Also, keep your movements and noise to a minimum. Walleyes rely on their impressive senses to hunt. Therefore, they shy away from areas with a lot of movements and noise.

Try using minnows since they are bigger baits and are enticing to the walleye.

When fishing for walleyes during their non-feeding hours, cast your lines deeper. They are more likely to be at the bottom.

Use a second and different lure. The first will attract walleye attention while the second one will entice it. When in tight spaces, jig closer to the water. Knowing a few jigging tricks will also come in handy. Whether by simple twitching or double pull, learn these tricks and you will not be disappointed.

Don’t forget the essential things for ice fishing. Make a shortlist of all the necessary items you need for catching fish. If you want to stay a long time on the ice, I recommend adding an ice fishing tent for better protection.

Lures and Baits for Walleye Fishing

Walleyes are aggressive hunters. Spoons, lipless crankbaits, and jigs that mimic small fish appearance are ideal choices. Use flashy baits and lures. Here are a few suggestions to get you going:

Use large size flash spoons of around 3/4 ounces. They move and flash mimicking prey when jigged.

Try the Rapala Jigging Rap since it hovers, darts turns, and float like a sucker.

The Chubby Darter with its unique movements and shape mimics a fish in distress.

Use soft baits since they are more realistic and very enticing for walleyes.

You could also use jigs since they provide crazy actions that attract walleyes easily.

Minnows are an amazing way to catch walleyes. Apart from being bigger, they are also real fish. With minnows, you have a greater chance of catching bigger walleye. They are suitable for jigging too.

Another suitable option bait for jigging is the Lunkerhunt Wax Worm. They provide an excellent tip for your jig.

The Rigs and Rods For Walleye Ice Fishing

The best live bait rig for walleye fishing should have a mainline with a sliding slip sinker. Follow it up with Snell consisting of a swivel, the line, and lastly the hook. Most Snells range between 4 and 5 feet in length.

The rig should be bumped along the bottom in areas likely to hold the walleye.

When compared, longer Snells often have better results as compared to shorter snells in clear waters. Since stealth is an important factor in walleye, fishing anglers prefer to tie their own snells with lighter limp monofilament. Over the counter, options come with heavier lines.

When choosing a rod for walleye fishing, ensure it is strong enough for large fish weight and sensitive enough for you to feel the faint baits.

When trolling, you can forego the sensitivity and go for strength. Choosing the best rod can be a difficult decision. The length of the rod should be between 6 to 6.5 feet. If trolling, go for longer and stronger rods. For power, get a rod with medium-light or medium power for jigging.

The weight of your line should be directly proportional to the power of your rod. For walleye fishing, the optimum range is from five to 12 pounds. Lastly, get a rod that is of high quality and durable. Check for a comfortable handle too.

Some of the better tip-ups also come with rod holders. Read the instructions and verify if you can work with your favorite rod.

Walleye Fishing at Night or During the Day

Walleyes tend to be active around dusk when they come out to hunt and feed. At the other times, they are less active and as such, do not move much. This is mostly at the dusk and dawn. Depending on the time, you prefer to fish, it is important that you learn walleye behavior and movements. This will make it easy for you to find the right spot and technique to deploy when fishing.

At night when the walleye are most active, you can use the jigging and spinning ice fishing techniques. Since the walleyes are more mobile, your movements should be minimal hence the suitability of these two techniques. During this time, they are also closer to the ice surface and in shallow waters where they are more likely to find their prey.

Walleyes feed during early dawn though not as much as in the evening. This is the best time if you do not prefer to fish during the night. The best technique to use when fishing during the day is trolling. This is because they are inactive for most of the day which will require you to move around a lot to find walleyes.

The depth for walleye fishing depends on the time you are fishing and how active they are at that particular time. At night when the walleyes are more active, for example, you will find them near the ice surface. This is where the prey is most likely to be located. Therefore, you can cast your line shallow.

During the day, or when the walleyes are inactive, you will have to cast your line deeper near the bottom. You will have to troll them since when they are not feeding; walleyes will most likely be located at the bottom and making very few movements.

A video can make things really easier. Have fun!

Ice fishing is a nice pastime for the winter season. Your winters do not have to be cold and boring anymore. With this information, you can add a new hobby or pick it up if you have none. You never know it; ice fishing for walleye might turn out to be your best one after all.

Chasing the walleye around the ice is fun, addictive, and challenging. The real benefit comes after you have caught the walleye. Whether for sport or as a meal, achieving your goal can be refreshing. However, keep in mind the legal size of walleye you are allowed to fish.