Sailing…….It’s the thing that amazing dreams, hit songs, and major motion pictures are made of. Practically everybody wants to try it and, if you’re one of the many who have been bitten by the sailing bug, there are some dangers of sailing that you need to know about before trying it. So, that being said, here are a few of them: 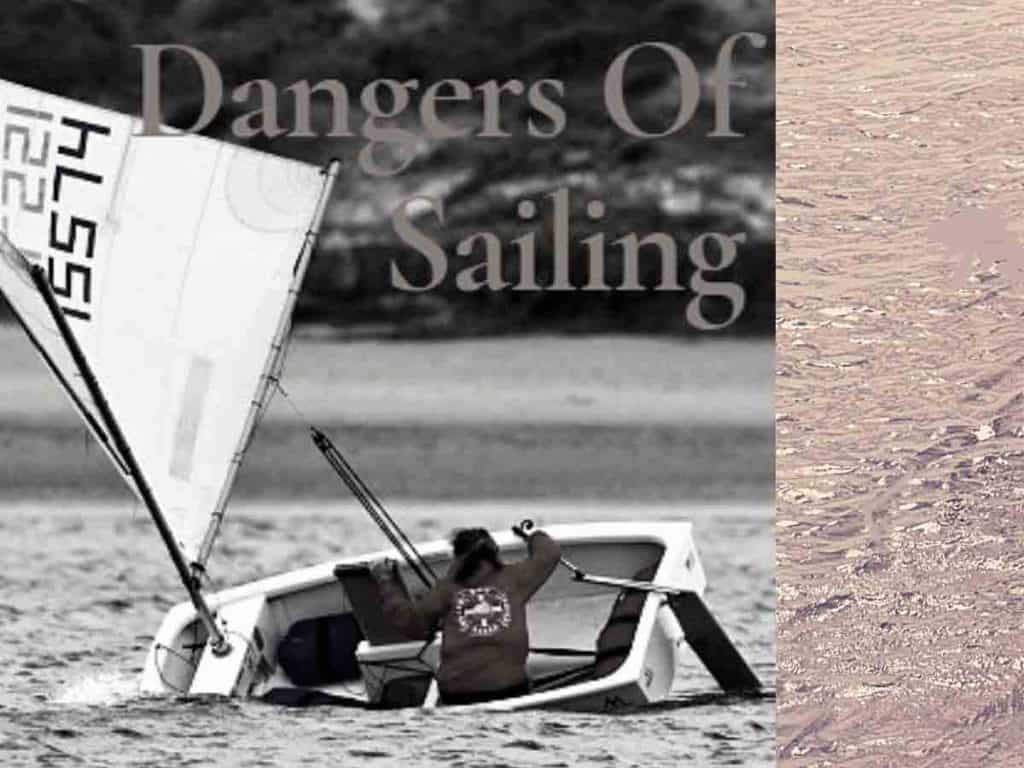 Most Frequent Dangers of Sailing

If someone falls overboard, it could be a real danger. if the others on board see him, they can tackle the situation. If no one noticed that there is a person fallen in the water, it is a real sailing danger.

So, it is important to be with others and communicate when doing something. Even communicate your movements when you are changing a position.

Dangers Of Sailing In A Windy Day

If unfortunately one of yours is fallen from the boat, first of all, communicate with other crews or members on board. You can shout or you can use a marine walkie talkie. Press the MOB or man overboard button on the GPS. It is naturally very important not to lose visual contact with the person overboard.

The next thing that we should do is to throw a lifebuoy for the MOB in the water. Also, you can marc the MOB with a smoke flare.

Then we should throw a line that will give confidence to the MOB.

we will come closer to the man pointing the wind. we should keep the aft side away from the man on the water and the propeller should be stopped.

Then we should bring the person aboard.

All the experienced sailors have experienced capsizing in their sailing trajectory. It may happen for strong winds, heavy waves or for any other reason that hampers the boat stability.

If you know how to recover a capsized boat, you will not get panicked. The most famous and effective method to upright a small sailboat is the scoop method. 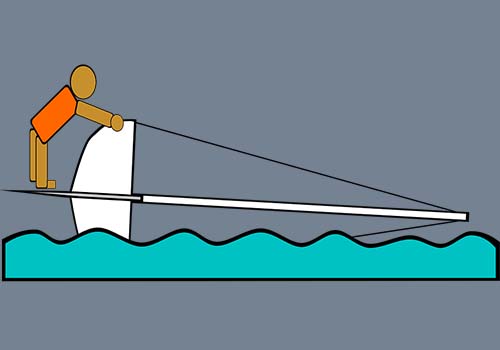 Recovery Of A Capsized Sailboat

To get up and to maintain the balance you can take the help of the jib sheets. With this method hopefully, the boat will be upright slowly. We should practice this method on safer water, if possible.

If a smaller single-handed boat capsizes, it could be easier to upright the boat. You should keep the mainsail in leeward position and get yourself on the centerboard. Hold the gunwale of the boat and incline your body towards the back to use your body weight effectively. This will bring the boat to the desired upright position.

Ropes And Other Obstacles

The ropes, chains, and other obstacles can represent a real sailing danger if not well secured. The ropes and chains can lash you with the help of a strong wind.

The ropes, chains or other things not secured on board can cause you an accident like falling on board or out of the vessel, especially at night.

If these materials are not well organized and properly secured. they will be wrapping and mixing with each other in a dangerous manner. If it is not a danger, at least, it will make your work more difficult.

Just as in any other sport, sailing can result in injuries and/or illness. That’s why every sailboat should be equipped with a well-stocked first aid kit. On a sailboat, you need a bit more than just your average household first aid kit.

Rolling and pitching are very common causes of dizziness or seasickness. In a small grade, it is not so dangerous, but, if you feel too bad, you will have to take care of yourself.

If it’s your own boat, consult with a nurse or research on the web what your kit should include. Since, when you’re sailing, you could be away from land for an extended period of time, you’ll want to ensure that you have everything to treat a sudden illness or injury, including splints in case of a broken bone.

And, again, if you’re going out on somebody else’s sailboat, don’t be afraid to ask if it’s equipped for a minor medical emergency.

Although wind and water are what sailors worry about the most, there are actually a few other occurrences to consider as well. A recent disaster off the coast of California is a prime example of how dangerous fire on a boat can be. In fact, 34 people lost their lives when a dive boat exploded.

This is one more example of how being aware at all times when sailing and having proper fire safety equipment (like fully-charged fire extinguishers) is crucial.

If you sail on a friend’s boat, don’t hesitate to look for and ask about fire extinguishers. If the boat doesn’t have any equipment in the event of a fire, just head back home and skip the trip altogether. He might call you a wimp but better wimpy than dead.

On the open water, a sailboat under sail has the right of way, however, caution should still be exercised as there are always boaters out there who simply don’t know the rules. You naturally want to avoid a collision at all times since it could cause severe hull damage and endanger lives.

By the same token, just like big rigs on the road, big ships can’t stop on a dime, so steer clear of them and give them a wide berth. If your sails are up when you’re approaching one, take them down as quickly as possible and motor until you’re clear to have better control of your sailboat and avoid a collision.

This report is made in 2010 by the coast guard:

When all of those statistics are put together, this situation becomes much clearer: The majority of sailing-related deaths actually occur when sailors fall into the water when they aren’t even engaged in what would be considered “dangerous sailing”. They are instead occurring while docking the sailboat, anchoring off, etc. when you would be least expecting the grim reaper to be lurking anywhere nearby.

So, it won’t come as much of a surprise, then, to hear that the Coast Guard has reported the biggest single factor that contributes to boating accidents and deaths happens to be “operator inattention.” This means that you have to pay attention to all of the issues of safety even if you don’t think that a dangerous situation is imminent.

Other interesting statistics brought to you by the Coast Guard include:

How to Remain Safe From Sailing Dangers?

The sailing education and its application in real life are the most important. So, we need to learn and practice sailing before starting. Gather all the knowledge that you can from all the sources of your reach. Know at least the basics of sailing before facing the sea.

Never Underestimate the Power of the Sea

OK, everybody is fairly well aware that some element of risk is involved in sailing, and it’s important for everyone to be safe. Nobody ever thinks that a sailing mishap could happen to them. In fact, most people believe that the only sailing dangers are being caught in a hurricane while at sea. After all, that would involve big waves, big winds, and maybe even a sailboat that is damaged or leaking. In fact, most sailors will never end up experiencing those particular sailing conditions, so what is there to be worried about?

Yes, it’s true that storms pose serious sailing risks and are responsible for a number of sailing fatalities each year. They’re usually the subject of some dramatic stories on the news, leading to warnings and investigations. In addition, numerous books have been scribed through the years all about seamanship and the special techniques for preventing problems on a sailboat during storm conditions.

The fact is, however, that you should never underestimate the power of the sea even under calm conditions. That’s because big storms are not the only dangers involved in sailing. In fact, many sailing accidents and even deaths occur when sailors aren’t even sailing under any dangerous conditions at all. So, it’s critical to respect the power of the sea even when the weather is calm.

You really need two basic things for developing the proper attitude regarding safety when you’re sailing and they are:

As a sailor, you need to be aware of the fact that the risk of dying is always there with you, especially when the wind and water are calm and you don’t see any reason to be afraid.

A “What if” Mentality

You don’t have to be constantly obsessing about the dangers of sailing, but anytime that you’re out on the water, you need to think along the lines of what could actually happen and what you would do.

A PFD-Never Leave Port Without It

You should also be sure to wear a personal flotation device (aka PFD or life jacket) at all times because falling overboard is the leading boating fatality cause. In the event that you or someone ends up falling overboard, knowing (and practicing in advance) an effective method to quickly turn the boat around and stop close to the man overboard for pickup is of critical importance.

This is called a crew overboard (COB) maneuver. It’s critical to always remember that your PFD is one of the most important safety equipment pieces. Another is a tethered-safety-harness for use in rough weather and if you sail solo. It helps ensure your safety by keeping you on the sailboat no matter what may happen. And, using jack lines can be a very effective way of staying clipped onto your boat with a tether.

One Hand For the Boat & One For Yourself

That’s usually the first saying that all sailors have to learn when they start out with learning to sail. Those stanchions and lifelines around the outside of the deck on a sailboat are there for a reason and are definitely not just for looks.

When you’re sailing, night or day, and have to walk around the deck either to just get from one place to another or to help with trimming the sails, be sure to hold on at all times.

Safety First At All Times

Sailboat safety should involve a number of activities such as being sure to pay attention to the weather around you. When we were sailing our 57-foot sailboat from Ft. Lauderdale to the Bahamas, we saw a squall in the distance. Our immediate assessment of the situation was that it was quite far away and most certainly not headed our way.

It’s not that we weren’t paying attention to it but that we simply misdiagnosed the danger. As you’ve probably guessed, it headed straight for us and we ended up making the crossing through a violent storm, giving new meaning to the saying “Lord, the sea is so large and my boat is so small!”

So, the lesson learned was this. If you’re close enough to your departure port to turn back when you see a squall, perhaps it would be safer to do so.

So, in conclusion, please don’t let a few warnings about the dangers of sailing put you off or make you afraid to try one of the most amazing things in the world! Just remember, the better your overall sailing skills are, the safer it will be for you.

And, when you’re not out sailing, read a good book  (or two)on seamanship for the purpose of improving your boating skills and overall knowledge. Don’t forget to study up on all of those nautical terms so you’ll know port from starboard, the bow from the stern, and so much more. But, most of all, have fun!